This is a game that according to some forums that I’m suppose to hate but I find myself playing this game over and over and currently clock more than 400 hours already. My benchmark is base on the setting that I’m using at this time and it may change should I change a new hardware or even with new graphic drivers. Since I’m currently been using the Windows 10 Technical Preview, I will do another benchmark once the actual OS comes out at the end of July.

This is obviously not the most optimal settings but the one I’m finding comfortable with it and the most beautiful setting without making the game crawl on my poorfag rig (check the specifications at the end of the post) though I obviously can’t run this game with all Ultra/Extreme settings.  The CPU is more suitable for Large rather than Ultra unit number that I’m using but since I can’t play with anything low than the largest unit sizes I have to drop other to compensate and with Rome II, one of the settings that caused huge CPU load is the shadows and even those running with latest i5 or i7 and current range of high end graphic cards are even advice to turn shadows to medium. 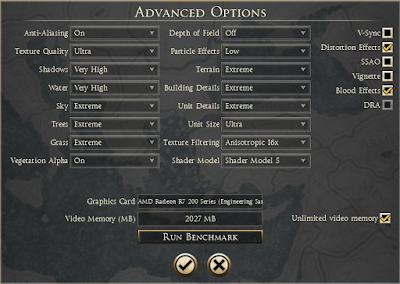 As you can see I can get an average 20+ fps with this settings though in real gaming condition as long as I do not use the close up camera during battles I can easily get 30+ fps average even on 20 vs 20 units battles. More than that then I usually use the auto-resolve button as the game will crawl to almost an unplayable condition except at the later stage of battles when most units are destroyed. 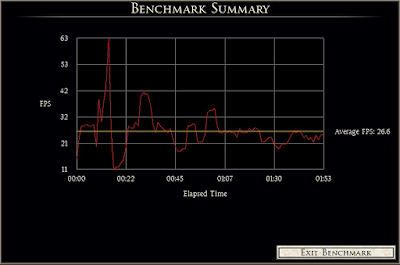 This benchmark is using the game build in benchmark featuring the Teutoberg Forest battle and I notices the slowdown especially when there’s a lot of projectiles using fires on the screen so on my game setting I have disabled the projectile fires too.

Before this, I was using an XFX HD 5770 1GB graphic card and most of the settings are mostly on medium and high. You can check the comparative benchmark done by AnandTech here.

While 60 fps is the standard acceptable rates according to many game reviews you could not expect the same if you have similar specification of rig like mine so for me the acceptable playable rates will be around 30 fps. To get that I'm using AMD Gaving Evolve software (Raptor) to get the best optmized settings. Using that basically lowered a few settings like Shadows and Water to low and reducing the Shader Model from 5 to 4.1 while maintaining other settings basically the same except Trees from Extreme to Ultra. 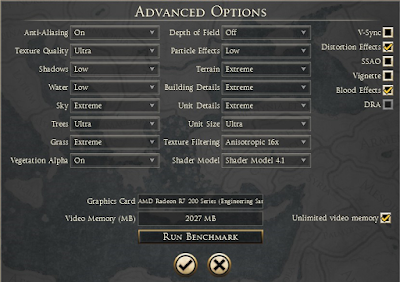 The result is these little tweaks gives nearly double the frame rates per second as seen below. When we have a low to mid range rig obviously we have to sacrifice graphical beauty to make our games playable. 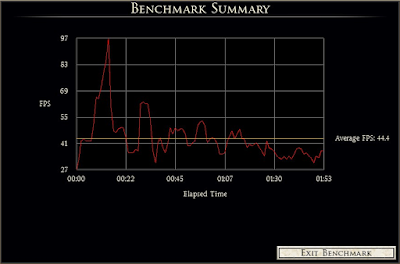 My final though is that this game will probably not have another major update though I'm hoping with the release of Windows 10 and DirectX 12 another optimization update will be release by the Creative Assembly. I am also interested to run another benchmark once the Steam OS is finally comes out and we will see that time whether an OS build specifically for gaming will have a major impact on games.